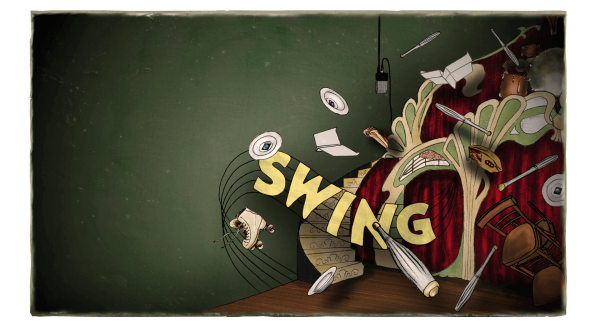 With “Swing”, Circus Ronaldo strikes a path for a younger generation of circus artists. A fresh wide range of all-round circus performers fire on all cylinders to the beat of the inimitable swing music of the forties.
Grand spectacle and small winks, swinging tones and a pinch of seduction. The contagious playfulness, lovely dynamic and young cheerfulness that the young troupe of Circus Ronaldo displays will make you fall in love with circus in a way you haven’t before.

Swing was created in 2018 and sprouted from Nanosh Ronaldo’s dream to make a circus show in the authentic Ronaldo atmosphere, and also tour with the show in the way that his grandparents did.
This is why Nanosh put together a new group of young artists to realize this dream with him.
This show has thus started with a “Back to the roots tour”, visiting the smaller municipalities in Flanders, but will extend to bigger cultural venues and festivals thanks to its success.