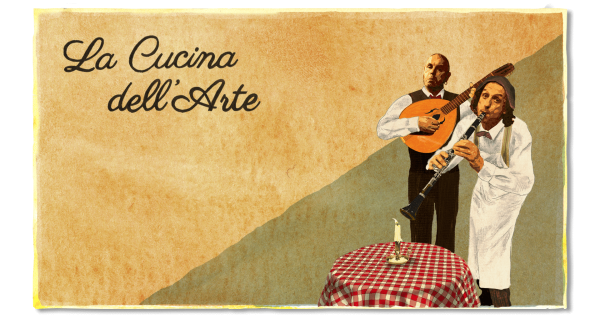 Since they were children, the brothers David and Danny Ronaldo have been playing the comedy of human weakness, ‘the clown’. Foolish human power games are also the main theme of La Cucina dell’Arte.
The hierarchy behind the pots and pans and the relationship between the chef and the assistant provide perfect situations for these clowns.
They also took inspiration from Fellini, the restaurant jugglers of the old vaudeville theatre, Goldoni, and the fact that everyone occasionally feels the urge to pull the tablecloth from under the special dinner service.
Danny Ronaldo apprenticed himself to the Sicilian master pizzaiolo, Paolino Bucca, and a 19th-century cartwheeled kitchen barrow was filled to the brim with porcelain crockery and the necessary edible and jugglable foodstuff.
Once the rickety little kitchen cupboards open, an accordion starts to lead a life of its own, the spoons play a tarantella on the wine bottles and the ‘fragile’ show can begin.

“The most cheerful kitchen in the world. The audience is so immersed in the play that every adult turns into a carefree child for an hour. Even the stiffest upper lips will curl in laughter on seeing the antics and slapstick.” - De Morgen - ****

La Cucina dell’Arte was created in 2003 and has since performed throughout the whole of Europe and several times in Australia and New Zealand.
By now the show has taken on a somewhat legendary reputation and tops the lists of most performances abroad by Flemish stage performers.
But thanks to the deep human relatability Cucina dell’Arte is immortal and is still regularly performed in Belgium and abroad.