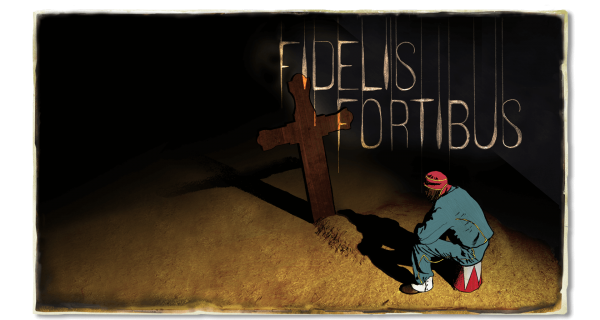 In Fidelis Fortibus the audience enters a circus tent where all the artists have died. They lie buried around the circle of discolored sawdust. There’s still an odor of horses but the bravura and bustling atmosphere of the circus is dead.
Danny Ronaldo is the only man left standing.
True to his old family traditions he guards over the graves and over his unsurpassable past that fills the whole space. Literally and figuratively.
But there’s also an old circus promise that you must never disappoint the audience…
And so, with unparallelled daring, he accepts the duel with his past. Big salvos of laughter are unearthed alongside sporadic forays into deep melancholy and poetry that sometimes far transcend the spectacular.

“In Circus Ronaldo’s Fidelis Fortibus Danny Ronaldo shows that being loyal to the past is both brave and tricky. As a result comes witty circus that, in a spectacularly intimate way, is generous with emotions and the wisdom of life.” - Knack Focus (29/6/2015)

Fidelis Fortibus was created in 2015 and has since played more than 300 performances. The show was nominated in 2016 for the theatre festival in Antwerp and was the first circus act to ever receive this nomination. It was also awarded the Cultural Prize by the City of Barcelona in 2017.